We’ve provided factual answers to these Frequently Asked Questions (FAQs). The FAQs are based on comments and questions we’ve heard during our public outreach. Please check back as we will continue to add more and please email us with any questions: utproject@parks.ca.gov.

Q:  Is the golf course expanding?

A:  No it is not. The area of turf will actually decrease by approximately 16 acres (15%) from 98 acres to 82 acres. As the golf course footprint will increase by 3 acres from 134 to 137 acres, the additional acres are areas of native vegetation included in the footprint. The golf course will remain 18-holes with similar yardage.

A:  No it is not. Washoe Meadows State Park will actually increase in size by two acres and Lake Valley State Recreation Area will decrease by two acres. The restored river and adjacent floodplain and riparian habitat will become part of Washoe Meadows, while the relocated holes will occupy more common upland habitat that has been previously disturbed.

Q:  How much of the Golf course is adjacent to the river? Will it decrease?

A: Yes the golf course will decrease. Currently over 6,300 feet of the golf course is adjacent to the river, with turf extending to near the river’s edge, leaving no riparian buffer.  The proposed ALT 2B Project actually reduces that by more than 5,000 feet to less than 1,300 feet, restoring the riparian floodplain and corridor.

A:  There will be increased access to the river. Over a mile of the river will be open to the public with a new ADA trail along the restored river. The existing road along the river in the southern part of the park will remain open to public use. There will be a new bridge for recreation access to connect the ADA trail from Hwy 50 to trails in Washoe Meadows. Increased access will allow more people to enjoy the river and the Park versus the current access situation which is only from a nearby neighborhood. There will also be a safe route for pedestrians through the golf course and over the river into Washoe Meadows State Park from Country Club Drive.

Q. Will people still be able to walk along the river when accessing the park from the N. Upper Truckee neighborhood?

Q:  How much golf course is in a Stream Environment Zone (SEZ) or near to the river?

A:  The proposed Project will reduce the part of the golf course located in a Stream Environment Zone (SEZ) by 20 acres. It will also reduce the area of golf course turf adjacent to the river from over 6300 linear feet to less than 1500 linear feet.

Q: What sensitive species are there in the park?

Q:  How will California State Parks protect the fens?

A:  State parks contracted with the California Native Plant Society to map and study the fens. The Fen is on a hill slope above the proposed Project and will be completely avoided by the Project. It will not be disturbed by excavation, run-off, or during construction.

Fens are wetlands formed above a confining (less permeable layer) that brings the groundwater to the surface and in turn supports wetland plants. This fen was impacted during the borrow pit excavations in the 1960’s, which cut into the hillside, creating seepage, but luckily not impacting the fen above. 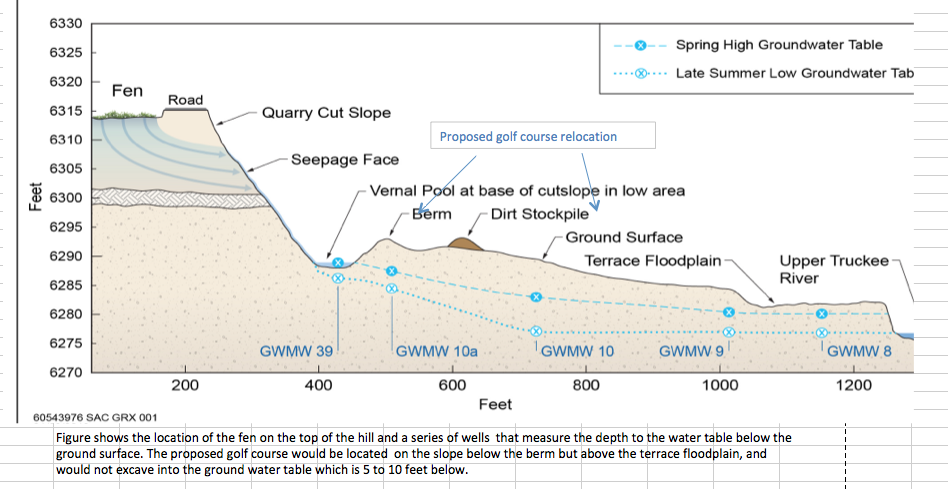 Q:  What was the Lawsuit about?

A:  A lawsuit challenging the adequacy of the EIR/EIS/EIS was filed in Alameda County Superior Court on February 29, 2012. The trial court granted the petition on four grounds:

State Parks responded to the lawsuit by preparing a draft PAAEA, which describes the proposed project as Preferred Alternative 2B, including its relationship to Alternatives 2 and 2A as described in the joint EIR/EIS/EIS.

Q: What about a Master Plan for Washoe Meadows State Park?

A: California State Parks will launch a planning process for the reconfigured Washoe Meadows State Park to determine recreation uses and trail systems. This planning process will be in coordination with the Meyers Community Plan Update. The plan will be confirmed through the public planning process and could include elements such as new trails, fishing access, cross-country skiing trailheads and parking.

Q: What is wrong with the river the way it is?

A: The Upper Truckee River has a long history of disturbance, including channel straightening, grazing, logging, and gravel mining that has negatively impacted the river. The river is unnaturally straight and deep and disconnected from its floodplain. This has increased erosion and sediment that led to degradation of habitat and water quality.

Q: How does the golf course revenue support State Parks?

A: Revenue from the golf course generates approximately $600,000 per year to CA State Parks. It is the only park in the Sierra district that operates at a profit and revenue from the course helps to support other parks to stay open, such as Emerald Bay, Sugar Pine Point, and Washoe Meadows.

Q: What will happen to fees to play at the golf course?

A: Currently fees range up to $89 dollars. Fees will continue to be capped by CA State Parks, which may allow the operator to charge an approximate $5 surcharge for the revamped course.

Q: Why not just have a 9 hole course?

A: Recreational demand is for an 18-hole regulation golf course. Handicaps are based on an 18-hole course and thus it’s required in order to host tournaments. The past economic study showed that a 9-hole course would be only marginally economically feasible, if at all.

Q: Why do the holes need to move?

A: The holes occupy the former floodplain. In order to make room to restore the river meanders and habitat, the holes need to move away from the river. The area adjacent to the river will flood more often and have a higher water table, and will be unsuitable for golf turf.

Q: How does the proposed Project ALT 2B compare to the existing golf course conditions:

A: See table below: 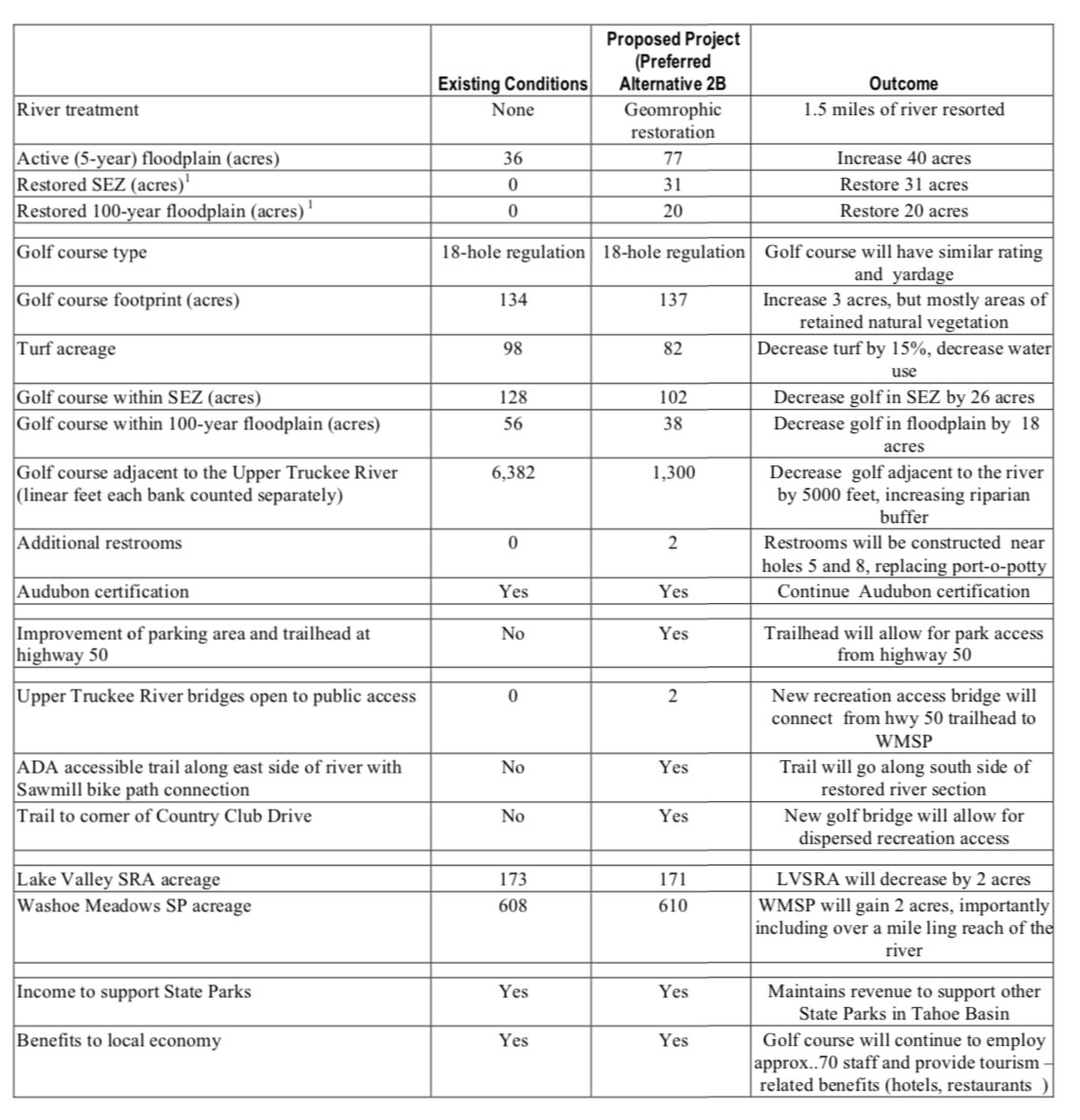 Q:  I heard that there are other options that could be possible to what is described for Alt 2B. Is this true?

A:  As long as those options are within the framework of the proposed Project Alternative 2B, they can be considered. Basically, it is feasible to consider variations of Alternative 2 as long as they do not have additional/increased impact and are within the area analyzed. The proposed Project in the EIR includes full restoration of the river and allows a maximum of five holes to be able to be relocated to keep an 18-hole regulation golf course. Alternative golf layouts that are feasible and can achieve these goals (18 hole course with  geomorphic river restoration) utilizing a smaller footprint are a variation of the proposed project and will be considered. Thus any number of holes can be moved to achieve those goals, varying from zero to 5 on the west side of the river.

Q: How would Project ALT 2B be funded?

A:  State Parks already has the funding earmarked for the design phase.  During that phase, it will be contracted to have the river design completed and engineer stamped plans prepared. Also during  this design phase, State Parks will be working with TRPA, CDFW, and the Water Quality Control board to provide guidelines on the Best Management practices that need to be included in permits and incorporated during and post construction to avoid any water quality or other impacts.